Pre Info:  Afghanistan and Ireland are all set to take on each other for the second ODI of the three-match series at the Sheikh Zayed Stadium. Afghanistan are looking pretty good with their team combination with the young debutant stepping up and scoring a huge century in the first ODI.They suffered a mini-collapse in the middle order though but were good enough to recover from that and give a target above 280. Naveen-ul-Haq gave a good bowling performance with Mujeeb and Rashid taking two wickets each.

Ireland did give a fight and will be looking to continue to do it to make it 1-1. However, everyone in their batting lineup contributed and fought till the end to chase a hefty target of 288. They would like to get a better start from their new-ball bowlers and carry the momentum forward to restrict the opposition from scoring quick runs. 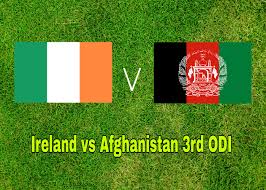 The 2nd ODI series between Afghanistan and Ireland will be played at the Sheikh Zayed Stadium, Abu Dhabi.

The match is scheduled to start at 9:30 AM

Another stunning day awaits in front of us for the second ODI. The temperature will be around 19-22 Degree Celsius throughout the match with zero chances of rain.

The pitch at Sheikh Zayed Stadium becomes slower with time in the second innings. Winning the toss and batting first would be perfect on this pitch.

Advertisement
Win up to Rs.10 Lakh! On BalleBaazi Fantasy App

Fantasy teams given on Platform is totally free and we are not charging anything from any members, teams are made after toss by our expert panel. The team is totally made by research, Stats, And Current Forms. It will be the choice of our users to play with the same team or not, you can also make some changes and create our own team,
IMPORTANT: Currently, We are covering Only 3 Fantasy Sites Team At Regular Base. So, you need to Join the league available on App. 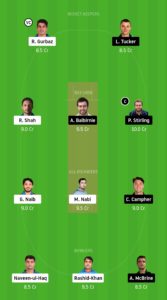 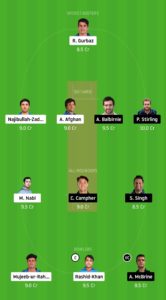 While selecting your team, consider the points and make your own decision and make sure to edit the team if there is some change after the toss when playing xi is announced. So, taking the help from above post make  Dream11 Big Bash Team.