The young tall right-arm medium pacer with high arm action named Arshad Iqbal added to the squad for u-19 World Cup 2018 just before his List A debut. The young kid with high cricketing desires made his List A debut for WAPDA in a one-day cup. Arshad usually idolizes Wasim Akram from him he inspired and start playing cricket. He came from the same area from where Yasir Shah and Junaid Khan hailed.

After playing some first-class cricket, Arshad was drafted in by Karachi Kings in the emerging category for PSL 2020. Under the mentorship of Wasim Akram and the support of other team members, Arshad impressed everyone and shows his talent. He ended the season with 9 wickets in seven matches. He also performed well in the first half of PSL 2021 and the National T20 Cup. In March 2021, due to his extraordinary performances in a shorter format of the game, Arshad selected in the T20 squad for the tour of South Africa and Zimbabwe. 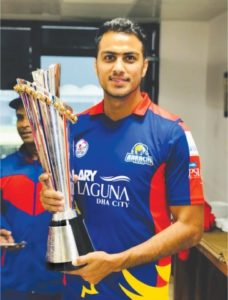 Controversies did by Arshad Iqbal

The All Out Cricket Post Interview of Arshad Iqbal

I hope you guys will love the article about Arshad Iqbal biography, you can also check out more cricket news by clicking here, play fantasy cricket on dream11 to win some real cash.