Man Utd last kept a clean sheet at home 2 games ago, and have kept 8 clean sheets in their last 20 home games. West Ham last failed to score away in the cup 1 games ago and have missed the net in 5 of their last 20 away cup games.

Of the 11 cup games Man Utd has won at home, they scored first 9 times. Of the 7 away games West Ham has lost, they conceded first 6 times.

The last time Man Utd failed to score at home in the cup was a 0-2 loss to Man City in January this year.

The last time West Ham kept a clean sheet away in the cup was in a 0-0 draw against Fulham in February this year.

Manchester United’s last match was in the FA Cup against Liverpool on Sunday 24th January at Old Trafford. They won the game 3-2.

West Ham United’s last match was in the FA Cup against Doncaster Rovers on Saturday 23rd January at London Stadium. They won the game 4-0. 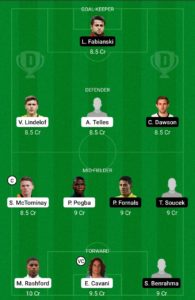