Former Pakistani opener Saeed Anwar was born in Karachi Sindh Pakistan on September 6, 1968. He spent his earlier life in Canada but after that, he returned back to Karachi and completed his education here and started his domestic career with his home team Karachi and later got selected for Pakistan national team on 1 January 1989 vs West Indies.

Saeed Anwar has the ability to score big runs and he showed that in the beginning phase of his career and later become an important part of the Pakistani team many cricket experts say that he was on of the best batsman Pakistan has ever produced. Anwar later became the captain of the Pakistani team for a short time. but after the death of his daughter in 2001 Saeed Anwar was broke and he was never the same after that and that was the reason for his retirement. 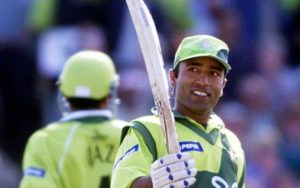 Controversies did by ( Saeed Anwar )

The All Out Cricket Post Interview Of Saeed Anwar

I hope you guys will love the article about Saeed Anwar biography, you can also check out more cricket news by clicking here, play fantasy cricket on dream11 to win some real cash.