Sri Lanka legend Kumar Sangakkara considers Rajasthan Royals (RR) cricketers Sanju Samson and Rahul Tewatia to have the capability to star in international cricket. The RR Director of Cricket stated that the duo has the right mindset and cricketing sense and have made progress well.

The Royals, who completed last in IPL 2020, will play their first game of the IPL 2021 edition against Punjab Kings (PBKS) at Wankhede Stadium, Mumbai, this week (Monday).

In a virtual press conference, Kumar Sangakkara emphasized the value of understanding the appropriate process to reach an ambition.

“Both Sanju and Rahul are capable of not just being (India) regulars, but great and outstanding performers on the international stage. They have an amazing ability, great cricketing sense, and both of them over the years have really progressed.

“Sanju has been a young batting superstar in the Indian scene for a long time, but the real key is to understand that there is a process to achieve that ambition and to take it to match by match. Each innings you play in the IPL, the focus should be on that. It is important that both Samson and Rahul have the trust of the team,” said Kumar Sangakkara, who has played in the IPL for Punjab Kings, Deccan Chargers and Sunrisers Hyderabad.

The Royals have let go of Steve Smith and will be led by Sanju Samson in IPL.

In Jos Buttler, Ben Stokes and Jofra Archer, the Royals have three of the prime England players. There’s a notion that the team’s achievement revolves around the English players.

With Archer having experienced surgery and being unavailable, RR stares at a stiff condition. Although, Kumar Sangakkara dismissed those notions.

“We have a lot of match-winners, not just English specific. With Sanju Samson, Rahul Tewatia, and our fast bowlers, and the key is to have different players who can do something special on the day. If it’s a different player each time, then that’s even better. Everyone is looking forward to starting the tournament,” added Kumar Sangakkara.

Under the leadership of Shane Warne, Rajasthan Royals were the first champions of the IPL in 2008. The side hasn’t seen enough success since 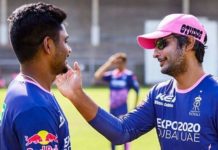 “Sangakkara drew a finger across his throat and it was chaos!” – Chris Morris reveals the scenes before the suspension 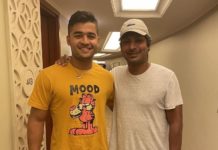 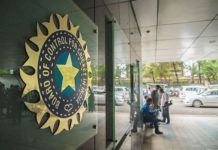 IPL 2021: No other match has to be rescheduled as of now After two KKR players test positive.