Taiwan Daredevils will go head to head against TCA Indians on the second day of the Taipei T10 League. Both the teams had a contrasting start to the season and begun their seasons in a completely different manner. Both Taiwan and TCA Indians started their campaign against Hsinchu Titans.

The TCA Indians got the desired start to their campaign with a win against Titans in the first game, whereas Daredevils lost their game against the same team. The TCA Indians played a thrilling encounter and defeated the Titans by three runs.

The game could be an important one for Taiwan Daredevils, who failed in the first game with the bat. The batting department could manage only to score 48 runs in ten overs.

When: 26 April 2019, 9:30 AM
Where: Yingfeng Ground in Songshan District
Where to Watch: The game is live streamable on SportsTiger App

Chinese Taipei in Taiwan is expected to experience typical weather with a tinge of showers. The current weather reports suggest that the temperature will revolve around 22 Degrees Celsius. There are chances of rain on the day. Humidity is expected to hover at around 87%.

The game between TDR and TCI will be played on a synthetic pitch. Therefore, the dependency of the pitch of the game will be the bare minimum. However, the team winning the toss should consider chasing.

TDR vs TCL Players to Watch out:

The First Day of Taipei T10 league gave pretty good indications of where the teams stand. The Taiwan Daredevils ultimately succumbed to their oppositions and failed miserably, whereas the TCA Indians performed decently well to defeat their opponent. The game between the two could prove to be a classic case of David vs. Goliath with Goliath winning this time. India Hot Deals back TCA Indians for a victory in the match. 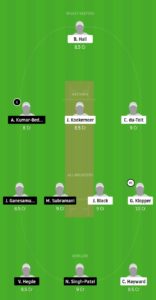