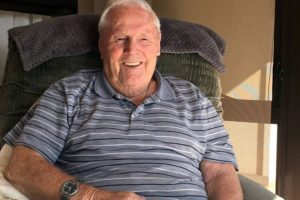 New Zealand Cricket confirming that Alan Burgess’ death with a thread of tweets on Twitter. Following a New Zealand Herald report, Burgess’ father was a part of the First World War and was according to reports also a cricketer.

Alan Burgess was a military tank driver for New Zealand’s forces in England under the Second World War. The Christchurch-birth cricketer played 14 first-class matches for Canterbury.

NZC is saddened to learn of the passing of the world’s oldest-living first-class cricketer, Alan Burgess. Alan’s daughter Pip said her father died overnight in his sleep, aged 100, at the Charles Upham Retirement Village in Rangiora.

He was 100 years and 250 days old at the time of his death. Burgess was a left-arm spin bowler who batted right-handed.

In 23 first-class innings, Burgess collected 466 runs for Canterbury. With the ball, he took 16 wickets in 14 games, as well as a five-wicket haul.

Alan Burgess’ daughter Pip told New Zealand cricket that her father watched the Black Caps harass Pakistan in the second Test match in Christchurch that concluded on Tuesday. In the consequence of his death, Otago’s Iain Gallaway is now the oldest New Zealand first-class cricketer alive.

Pip said her father had been in good form up to the end, and had spent much of yesterday watching the BLACKCAPS play Pakistan in the second Test, on TV, and had seen Kane Williamson bring up his double century.

If we look at our Indian former fist class cricketer Raghunath Chandorkar is the oldest first-class player alive now. The Maharashtra-born wicket-keeper has been a centenarian two months ago. Chandorkar played seven first-class matches for Maharashtra and Mumbai, scoring 155 runs.