Of the 16 cup games Man City has won at home, they scored first 14 times. Of the 8 away games Bournemouth has lost, they conceded first 8 times.

Manchester City’s last match was in League Cup against Aston Villa on Sunday 1st March at Villa Park. They won the game 1-2.

Bournemouth’s last match was in League Cup against Crystal Palace on Tuesday 15th September at Vitality Stadium. They drew the game 0-0. 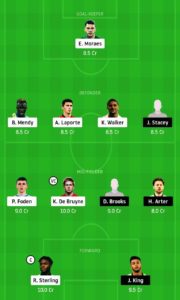