Manchester United host Southampton in matchday 22 of the Premier League on Tuesday 2nd February, 8:15pm at Old Trafford. The hosts currently sit in 2nd place in the table having drawn against Arsenal 0-0 last time out, while the visitors are in 11th after their 0-1 loss against Aston Villa.

Man Utd last kept a clean sheet at home 3 games ago, and have kept 9 clean sheets in their last 20 home games. Southampton last failed to score away in the league 1 games ago and have missed the net in 4 of their last 20 away league games.

Of the 10 league games Man Utd has won at home, they scored first 8 times. Of the 4 away games Southampton has lost, they conceded first 4 times.

45% of Man Utd’s last 20 home league games have ended with Both teams scoring. They won 4, drew 3 and lost 2 of those games.

55% of Southampton’s last 20 away league games ended with both teams scoring, they won 5, drew 1 and lost 5 of those games.

The last time Man Utd failed to score at home in the league was a 0-0 draw to Man City in December 2020.

The last time Southampton kept a clean sheet away in the league was in a 0-0 draw against Fulham in December 2020.

Manchester United’s last match was in the Premier League against Arsenal on Saturday 30th January at Emirates Stadium. They drew the game 0-0.

Southampton’s last match was in the Premier League against Aston Villa on Saturday 30th January at St. Mary’s Stadium. They lost the game 0-1. 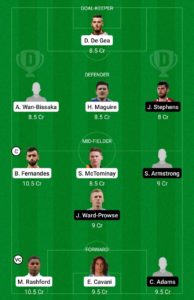