Wolverhampton Wanderers host Arsenal in matchday 22 of the Premier League on Tuesday 2nd February, 6:00pm at Molineux Stadium. The hosts currently sit in 14th place in the table having lost against Crystal Palace 1-0 last time out, while the visitors are in 9th after their 0-0 draw against Manchester United.

Wolves last kept a clean sheet at home 7 games ago, and have kept 8 clean sheets in their last 20 home games. Arsenal last failed to score away in the league 5 games ago and have missed the net in 6 of their last 20 away league games.

Of the 8 league games Wolves has won at home, they scored first 6 times. Of the 8 away games Arsenal has lost, they conceded first 5 times.

50% of Wolves’s last 20 home league games have ended with Both teams scoring. They won 2, drew 4 and lost 4 of those games.

40% of Arsenal’s last 20 away league games ended with both teams scoring, they won 1, drew 4 and lost 3 of those games.

The last time Wolves failed to score at home in the league was a 0-1 loss to A Villa in December 2020.

The last time Arsenal kept a clean sheet away in the league was in a 4-0 win against West Brom in January this year.

Wolverhampton Wanderers’s last match was in the Premier League against Crystal Palace on Saturday 30th January at Selhurst Park. They lost the game 1-0.

Arsenal’s last match was in the Premier League against Manchester United on Saturday 30th January at Emirates Stadium. They drew the game 0-0. 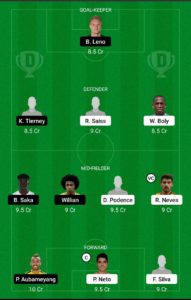