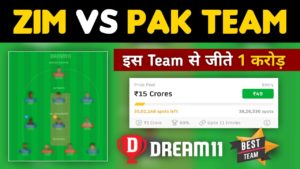 ZIM vs PAK Dream11 Team Pre Info: The 2nd T20 of the three-match series between Zimbabwe and Pakistan will be played at the venue of Harare Sports Club, Harare.

Zimbabwe had a decent start of the series and they gave a good fight to guests and Zimbabwe was even so near to pull off a victory which could have been their 1st win against Pakistan in T20 so even though Zimbabwe lost the series opener but they will be pretty happy with their performance the batting unit needs bit improvements and Brendon Taylor’s comeback can sort that out for the hosts so we might see a better fight by Zimbabwe in this match.

On the other hands, Pakistan’s winning run in the T20 is still going on but their middle order has been a matter of concern for them and Pakistan is continuously trying to get a better combination in the middle order but they aren’t able to find that combination till now T20 world cup is just around the corner and Pakistan have to farm a decent middle order if they want themselves to be counted in the title race.

ZIM vs PAK Head to Head: 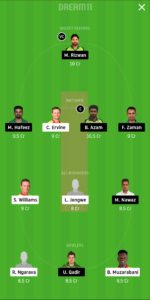 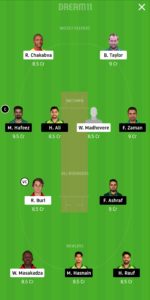 While selecting your team, consider the points and make your own decision and make sure to edit the team if there is some change after the toss when playing xi is announced. So, taking the help from the above post make ZIM vs PAK Dream11 Team.