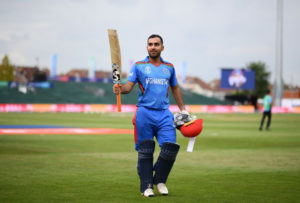 A left-handed batsman with solid technique and great temperament named “HashmatullahShahidi” started the initial cricket idolizing Kumar Sangakkara in his childhood. He has the special role to build innings and play throughout the innings to build a solid foundation. Although his strike rate in ODI’s is not much pleasing he’s given this role to perform.

In the final match of the 2017–18 Ahmad Shah AbdaliTournament, batting for Band-e-Amir Region against SpeenGhar Region, he scored 163 runs and caught the eyes of selectors. He made his ODI’s debut against Kenya in 2013. Hashmatullah came into the limelight when he smashes 97 not out against Pakistan in Asia Cup 2018 and put a respectable total of 257 runs. Again in a warmup game against Pakistan in world cup 2019, Hashmatullah scored 74* to finish the chase of 263.

He was one of those eleven players to feature in the maiden test match against India in 2018 where his score of 36 not out is the second-highest for Afghanistan. Playing against Zimbabwe, he becomes the first player from Afghanistan to score 200 not out in test cricket in march 2021. 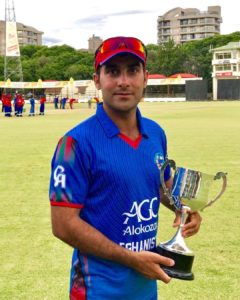 Controversies did by Hashmatullah Shahidi

The All Out Cricket Post Interview Of Hashmatullah Shahidi

I hope you guys will love the article about Hashmatullah Shahidi biography, you can also check out more cricket news by clicking here, play fantasy cricket on dream11 to win some real cash.