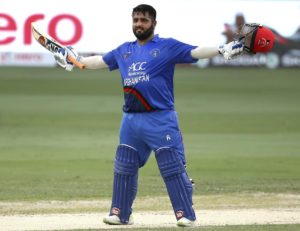 Afghanistan’s explosive wicketkeeper-batsman Mohammad Shahzad started playing cricket at his early age while staying in a refugee camp in Peshawar. Originally he’s from Nangarhar but he played a lot of cricket in Pakistan and also got married there before moving back to his homeland.

Mohammad Shahzad was one of the eleven cricketers to feature in Afghanistan’s first-ever Test match in 2018 against India. Shahzad introduced himself in world cricket when he smashed a ton against Netherland in a first-class game. With this, he becomes the first player from Afghanistan to score a century in an ODI game. Following the next year, Shahzad scores a double century against Canada to chase down a mammoth target of 494 in the Intercontinental Cup. Shahzad finished this tournament as the top run-getter with 802 runs at a healthy average of 80, including two 100’s and five 50’s. He was also leading stats for being the best wicket-keeper batsman, with a total of 28 dismissals behind the stumps, including 25 catches and 3 stumpings in the event.

Mohammad Shahzad also has a very rare record when he scoring an ODI hundred in the lowest team score – by reaching an ODI century at a point when Afghanistan’s score was just 131, he achieved this unique record against India in Asia Cup 2018. Apart from International cricket, Shahzad also performed well for franchises he played for. Playing in the T10 league, Shahzad played one of the explosive knocks in cricket history where he smashes 74 runs on just 16 deliveries at a strike-rate of 462.50, slamming eight sixes and six fours. 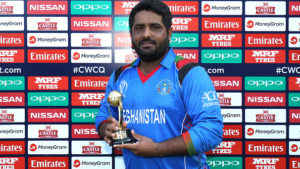 Controversies did by Mohammad Shahzad

The All Out Cricket Post Interview Of Mohammad Shahzad

I hope you guys will love the article about Mohammad Shahzad biography, you can also check out more cricket news by clicking here, play fantasy cricket on dream11 to win some real cash.