Ravindra Jadeja Indian All-rounder who made his debut for the Indian cricket team on 8 February 2009 against Sri Lanka. He is a left-handed middle-order batsman and slow left-arm orthodox. He plays for Chennai Super Kings in the Indian Premier League. 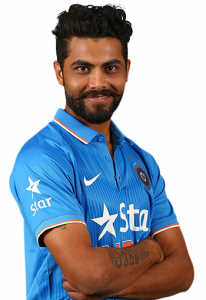 Jadeja was selected for the 2015 Cricket World Cup in Australia and New Zealand despite not being fully fit due to a shoulder injury. He took 9 wickets in 8 games. His returns with the bat were modest, scoring just 57 runs from 5 innings. India went on to lose against Australia in the semi-final. After his poor performance in the next ODI series in Bangladesh, he was dropped from the Indian team.

1. He became the first Indian bowler after Anil Kumble to top ICC ODI Bowlers Rankings
2. He is the only Indian to score 3 triple centuries in First-Class Cricket

He caught the attention of the national selectors with his strong all-round performance shown in 2008–09 Ranji Trophy (42 wickets, 739 runs).

He got into a fight with his teammate Suresh Raina dropped two catches against West Indies in July 2013. He Had a verbal spat with James Anderson in the 2014 India’s tour of England. While doing commentary in World Cup Match 2019, Sanjay Manjrekar Called Ravindra Jadeja a bits and pieces cricketers. To this, Jadeja said he has enough of Manjrekar’s verbal diarrhea.