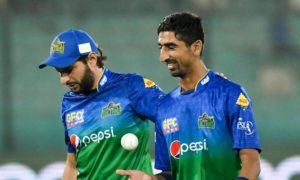 Hailed from the rural area of Larkana, speed star ShahnawazDahani was not sure whether he will play cricket or do a government job in the future until an official of Larkana regional cricket found him while playing tape ball cricket. He uses to work in fields with his father to make their living.

ShahnawazDahani who idolizes Kiwi great Shane Bond came into the limelight when he took 17 wickets in 5 matches for Sindh 2nd XI later he promoted to the 1st eleven.  In the drafting of PSL 6, he was drafted in by Multan Sultans in the Emerging category. He made his debut against Peshawar Zalmi where he took 2 wickets in the 17th over. In the first half of PSL, he took 9 wickets in just 4 matches as the joint wicket-taker with ShaheenAfridi. His brilliant performance hailed by the cricketing world and later named in Test squad against Zimbabwe.

Controversies did by Shahnawaz Dahani

The All Out Cricket Post Interview of Shahnawaz Dahani

I hope you guys will love the article about Shahnawaz Dahani biography, you can also check out more cricket news by clicking here, play fantasy cricket on dream11 to win some real cash.