Sheldon Cottrell Biography: Was born on 19 august 1989 in Jamaica. Cottrell is a west-indies professional Bowler Before to his Cricket career Cottrell was a Soilder in jamaican Defence During fifth ODI of India and west-indies at Sabina Park Jamaica Cottrell was in Army Workforce for Guarding the pitch. He’s very famous for his Marching Celebrations after taking a wicket. In an interview cottrell explained why he salute.

”It’s a military-style salute. I’m a soldier by profession. Me saluting is just to show my respect to the Jamaica Defence Force. I do it every time I get a wicket. I practised it for six months when I was training in the army”Samuel Badree Full Biography, Records, Height, Age, Wife, & More

He started his international cricket career in 2013 in a Test Debut against India at Eden Gardens also it was Sachin Tendulkar’s final test match. after one year in march 2014 made his T20 debut against England at Kensington Oval and ODI debut against South Africa in Jan 2015. In 2019 cricket world cup he finished tournament with a leading wicket tacker for west-indies as 12 wickets in nine matches. later For IPL 2020 he was bought by Kings XI Punjab for 8.50cr which is postponed due to global Pandemic Covid-19. 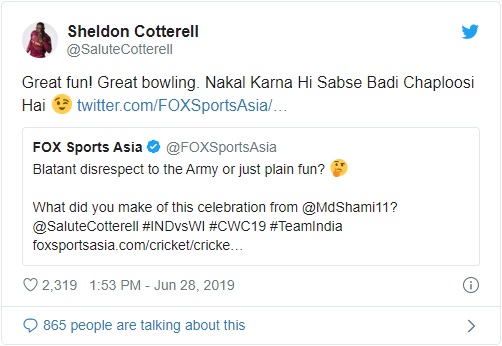 hope you guys will love this article about Sheldon Cottrell biography, you can also check out more cricket news by clicking here, play fantasy cricket on dream11 to win some real cash.